15 Things I'd Tell My Younger Self

I  read a short article online the other day and I knew right away that I wanted to write something like that for my own life. However, no old school pen-and-paper writing for the time being because I sprained my finger during a workout session, but yes to typing. Hence, here's a blog post. 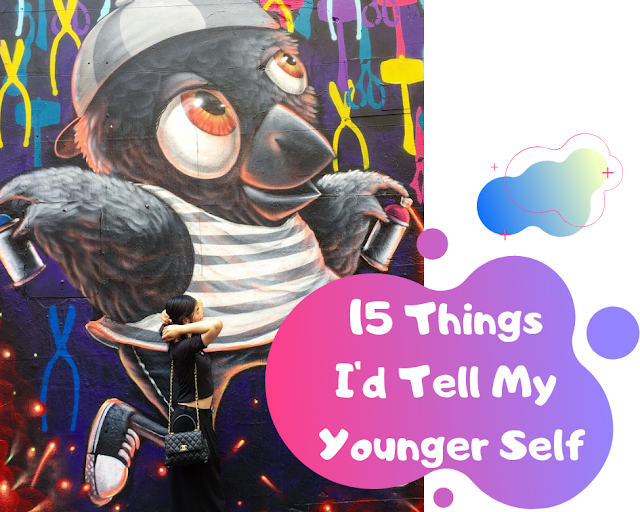 There are 2 ways to look at a post like this. Either it's completely bullshit because you know your younger self wouldn't give a damn about this whole lecture that you are about to give her OR it's a good retrospective way to see how far you've grown as a person. For me, it's a mixture of both. To be honest, there were things that I felt my younger self did better than I do right now.

1. Stop buying useless crap. You will end up throwing those things away anyway.
Ask yourself, "am I willing to bring this thing along with me the next time I move?" or "how often do you think you will use this thing?" Think about the ROI. The clothes that you thought were the in-thing at the moment, you'll end up cringing so badly when you look back at your old #OOTD shots. The knick-knacks that were cheap and cute will end up collecting dust in the corner of your room. Chances are, you'll forget that you own most of those things that you wanted at one point so badly, so why even bother buying them?


2. You will end up liking coffee. Cappuccino will be your favourite.
I know right, shocking! You'll end up becoming a barista (as your first ever job) and you had to drink the crappy ones that you made before selling to customers in Melbourne. Afterall, what's the point of living in Melbourne if you don't how to appreciate coffee? However, you still can't deal with Kopi-O (for those who don't know, it's the Malaysian black coffee), another bummer!


3. Embrace your emotions when they come to you.
Shoving your emotions aside it's just like sweeping garbage underneath your bed. You will have to pay the price later on when you have reached your emotional brink. Accept it, feel it and deal with it entirely before closing that chapter off for good. On that note, don't hold grudges against anybody nor yourself - let the past be in the past because it's done.

4. You are better at not giving a crap about the external world. Keep it that way.
Don't trade your own happiness for external validations. The praises from others, the high scores, the amount of money you earn, the bags that you own...do not define you. Happiness should come from within, not from the outside. If you rely on the external world to make you happy, you'll exhaust yourself. Life will become hollow and meaningless sooner or later because you are giving away your own power. Take it back bitch!


5. You will workout, watch your diet and all that shit in a sustainable way. The gym and yoga mat will play a great part in your life.
Sweating is still a huge No No - it's only acceptable when you are working out, indoors. It's always the way it is since you were a kid anyway! The good thing is that you'll lose a lot of weight which you have never thought of losing. You arms will be half of their current size. You have to throw out most of your pants because they would just fall off without the need to unzip. You have your future self to thank for putting in the hard work for your old horrible eating habits.


6. Trust your gut.
It will benefit you in a lot of ways. Including helping you ace your exams when you didn't really study for it. PS: You'll get an A+ in History during SPM despite only studying for the topics that you felt were easier to remember. Simultaneously, thank the Universe.


7. Cherish your friends.
They are the ones who grew up with you and they know the most authentic you before you were shaped into someone else by the society. No matter how far and how long you guys are apart from one another, do make the effort to stay in touch. You guys will still be acting like crazy kids during meet-ups even after 10 years.


8. Keep an open mind.
You have a very strong opinion about how things in life should either be black-or-white but you'll eventually grow out of it - Oh, and you will start embracing the grey area so much that you created a brand out of this concept! Respect and accept other people's behaviours, beliefs, opinions, ideologies, religions, cultures because these things will contribute to your wisdom later on.


9. You will be crazily in love with the Korean culture.
Bet you didn't see this coming either, huh?! The lengths you can go just for a handsome guy who plays the guitar! Learning the language, accepting spicy food, traveling to Korea solo, loving Korean cuisine and all that...well, love is blind they said.


10. You will end up liking spicy food.
Thanks to point #9, you conquered the impossible. However, you still order Wan Ton Mee whenever you have the chance to.


11. Focus on the long term instead of short term goals.
Back to #1, watch where and how you are spending your money. If your goal is to travel around, then stop buying bullshit things that do not serve you. Don't go to the cinemas without any epic reason though I know movie tickets were way cheaper at your age. Every penny counts. Every action and choice that you make do contribute and affect your future life in a way whether it's conscious or unconscious. Get your shit together and focus on the long term goals! Also, remember that although money can't buy you happiness, having money is freedom. Just don't confuse the means with the ends.


12. You probably don't look up to the same people anymore.
It's not your fault. You do change a lot in terms of mindset, life goals and all that through a lot of soul searching and wall-banging (not the literal way). 90% of the people just cruise around on autopilot mode doing what they are doing. They may be good at what they do but it doesn't mean that they are happy. Find inspirations and role models and like-minded people who are truly living the lives that you want to live and learn from them.


13. Do not have regrets.
You did it because you wanted it at some point in your life. Even if it didn't turn out the way you wanted to, wear it like a badge of honour - you earned it! It's way better to go all out, do it, own it and then say "I shouldn't have" than going through the remaining days thinking about "what if I did that".


14. The sky is the limit.
Don't let anyone (by that I mean any other soul regardless of who they are) tell you you can't do something. When someone tells you that, they are just saying it because they can't imagine themselves having to go through it. It just says a lot about their own personal capabilities and that has absolutely nothing to do with you. Tie it back to #11. If you know what you want, and you go at it with full force and not lose faith in yourself and the journey, you'll eventually get there - no buts about it! The only reason that you'd fail at something is because you don't want it bad enough because you know you'll get it if you want it bad enough.


15. Self love isn't what you think it is.
It has nothing to do with massages, getting manicures and pedicures and things like that. It's not about what you do but how you do and who you are as a person. It's more of a head than a heart thing - though it's best if you could strike an optimal balance between those 2. Stop being your own enemy and start cherishing and having more faith in yourself. Put yourself on the pedestal, just like Mushu!
Labels: The Scribbles