The one and only Guitar Goddess ♥ ORIANTHI PANAGARIS - Part 1

Part 1: How Orianthi Panagaris and guitars entered my life and never go out forever 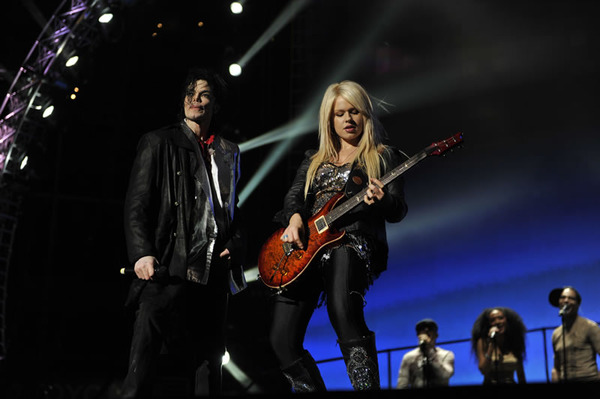 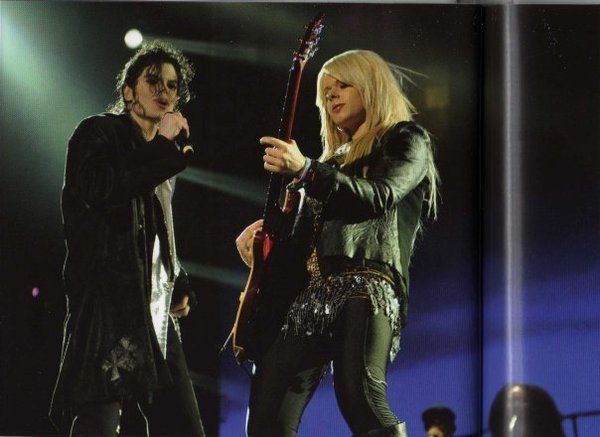 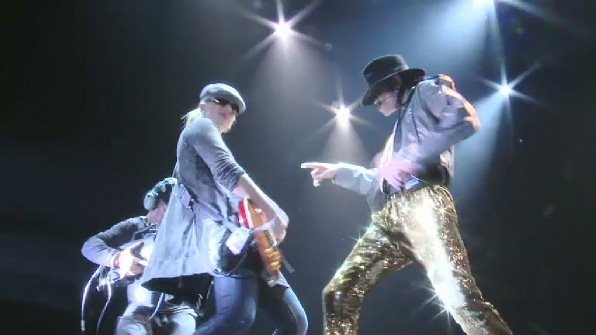 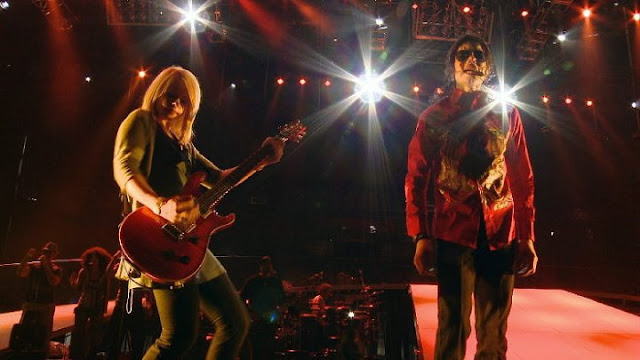 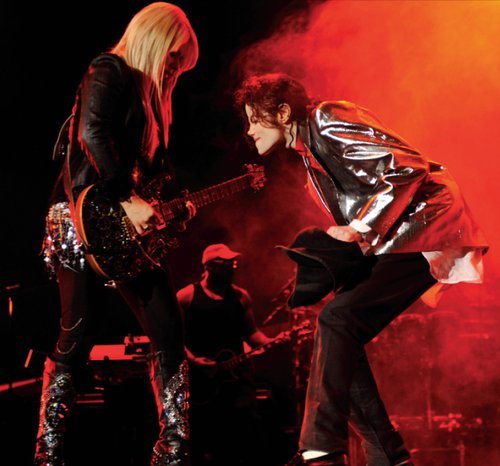 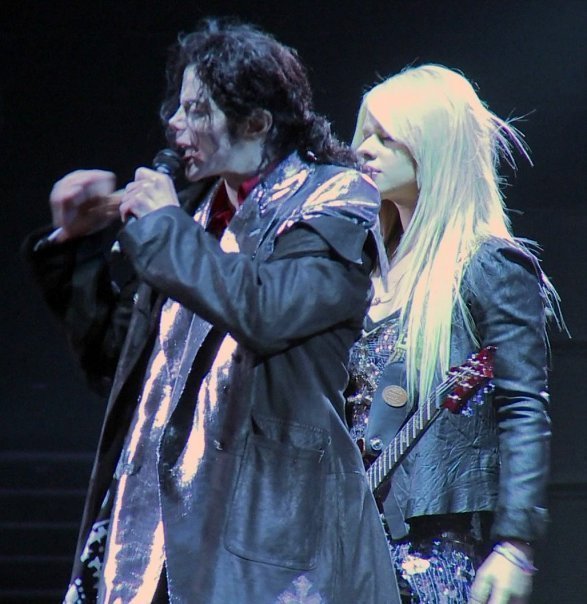 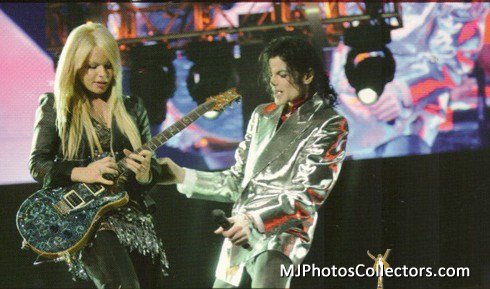 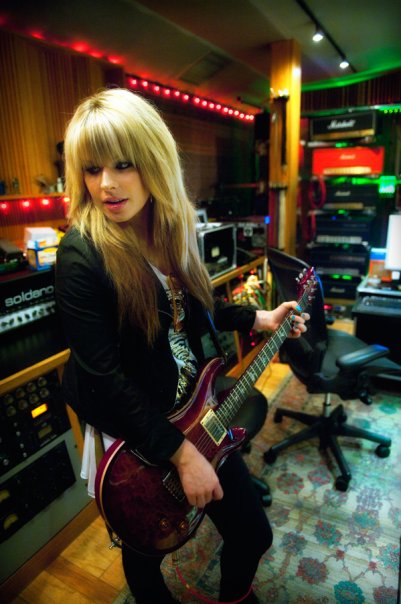 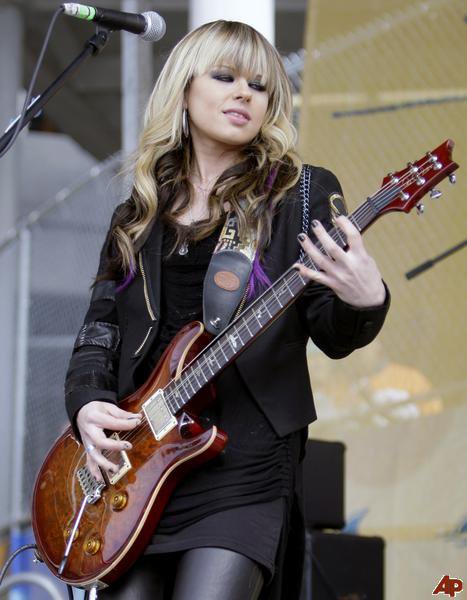 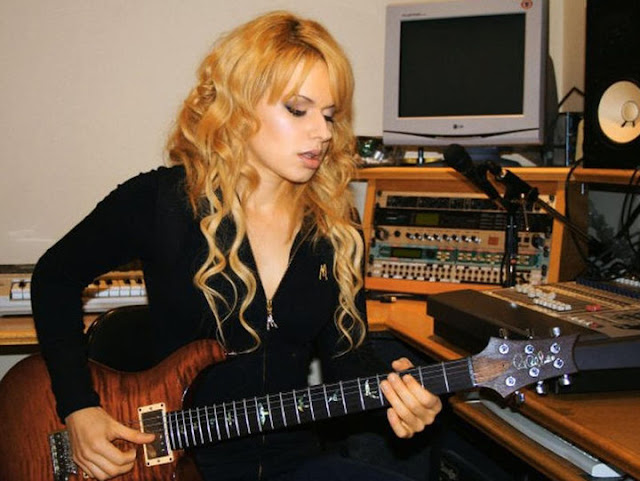 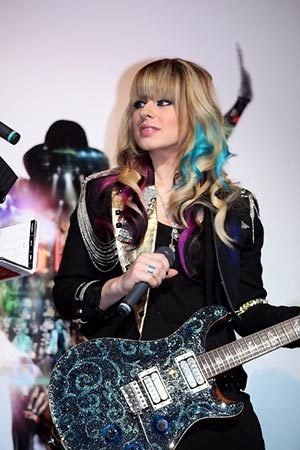 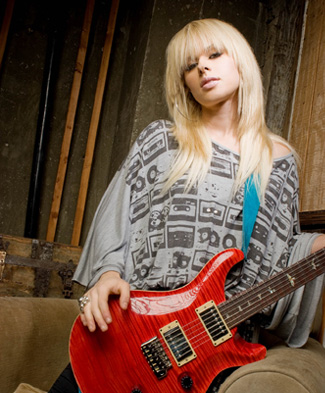 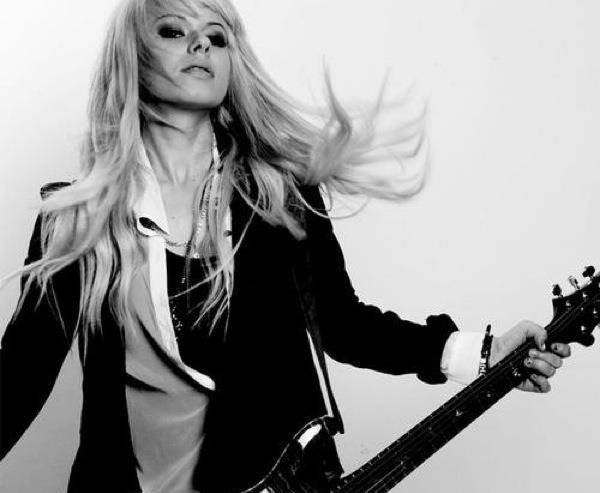 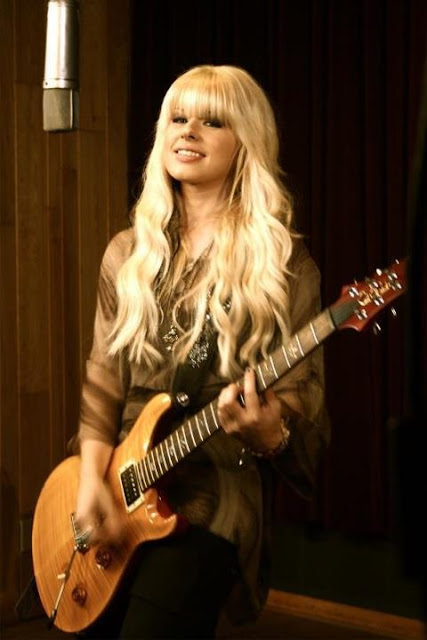 Tell me this girl doesn't dazzle you, then I will tell you to go to see a doctor or check your eyes and brain!

From there, I know her name is ORIANTHI PANAGARIS. Adelaide born guitar prodigy. Gorgeous, talented and cute. Most importantly, she has her style. Instead of being the wild, rebellious, wild, bad-girl looking guitarist, she's the exact opposite. Sweet smile, pretty face, long blonde hair, pure, nice voice, down to earth, humble, friendly and polite. Whatever good qualities you can think of, you name it and she has it. No joke! Upon looking her up, I spotted her music video-According To You. I was totally blown away. Seeing a girl playing so insanely fantastic at such a young age made me speechless. Plus, looking at her photos, she's cool! There's no other words to describe her except for the word PERFECT! Since then, I started having interest in guitars and her as well. Well, I actually had an acoustic guitar at home for quite some time but I never had the real passion to learn it. Until I saw her.....I started to consider....I started talking about her A LOT in school. At first when I first mentioned her my friends didn't know who she was, then after 1 week or 2, nearly all of my classmates know her. Orianthi's photos appeared more and more on my Facebook and her songs went into my iPod one by one. Unconsciously, I was addicted to her (until now, I still am) Then, the 3rd time when I watched This Is It, I knew by heart that I MUST LEARN ELECTRIC GUITAR.

By the time I watched This Is It for the 4th time, ORIANTHI PANAGARIS had already become the 2nd most important person in my life. (No.1 is Michael Jackson for sure). It was after my major exams and my mom asked me if I wanted to get double grade ballet classes. After considering for a day or two, I plucked up my courage and told my mom I didn't want to get double grades, I would just take the lessons as usual, one exam a year. However, I told her I wanted to learn guitar. Not acoustic but electric guitar. She kept quiet and didn't say anything. I was certain that she knew where did that idea came from because I couldn't stop talking about Orianthi ever since.

At first I suggested that I would go to the free guitar lessons which my tuition teacher was providing, at her residential area with other people who were much older than me, even though it's only lessons for acoustic guitars. That's how I started. But the lessons were held every fortnightly and I knew I wouldn't get to learn much before the long holidays end. So I begged my mom to let me go for real lessons at music schools. Frankly speaking, my mom wasn't really supportive towards my passion for guitars. Just like what many people think, she thought (still thinking, I SUPPOSE :p) that guitars were more for guys. It's a male dominated thing, and it would be weird for girls to learn guitar. Seeing Orianthi being so charismatic on guitars, I know that statement isn't true anymore in the 21st century. In the end, mom gave in to me...I was begging and begging non-stop day and night with 2 conditions-I had to find out and with everything about my lesson before enrollment AND I couldn't buy electric guitar immediately because she's afraid that I might give up on electric guitar very soon. Anyway, I agreed without hesitating.

I had 3 guitar teachers. The first teacher, I only had 1 lesson with him and then I quit from that music school. I initially chose that music school was because it's in town and I could go there before my tuition. Before I enrolled, the person in charge over there told me I didn't have to buy electric guitar beforehand, she told me they would lend me one during my lessons. On the first day of my lesson, the teacher was 10minutes late. After coming in, he crapped a lot, boasting about himself and didn't teach me anything at all. What made me furious was he asked me to bring my own acoustic guitar to each lesson. Something's not right here. Obviously, the music school was just trying to get me enrolled and it was practically a lie. I questioned them and the owner of the music school then told me she had already mentioned that to me in advance BEFORE I enrolled. What a joke! So my mom went to complain and got all the money back.

2nd guitar teacher was a rather old man, good tempered but I didn't like him not having the passion and energy like young guitar teachers do. He's that kind of teacher who taught based on books. Not fun at all. I didn't want it to be like my experience on piano lessons which was exactly like that. Anyway, after having 2 months of express class with him, I bought my first electric guitar. Sad case it wasn't PRS, Fender or whatsoever, but as a beginner, I would just stick with it without any complaints, temporary. I bought it with my own money. Actually it's the money given by the banks because I got straight As in PMR. I bought an amp with it too! x)

Soon, I switched to the other music school and met my teacher, Alex. (Despite the super lame jokes you cracked on facebook, you are A SUPER GREAT TEACHER! THANKS ALEX! YOU ARE THE BEST TEACHER EVER!) He was the one who taught me my first guitar solo at my 2nd lesson. Unbelievably, he taught me Orianthi's According To You as my first song!!!!!! Gosh!!!! It was hard work but totally worth it. And he also taught me Orianthi's Highly Strung which killed my fingers a lot, and it took me nearly 5 months to learn the complete song. Even I can't go to his lessons anymore right now, we still remain as friends, a nice teacher and a funny friend! :D 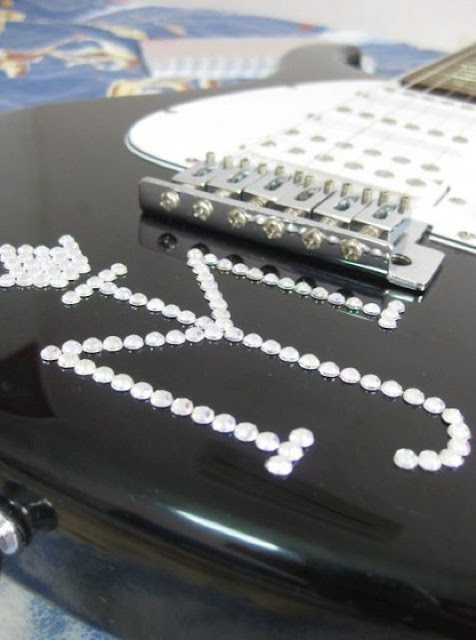 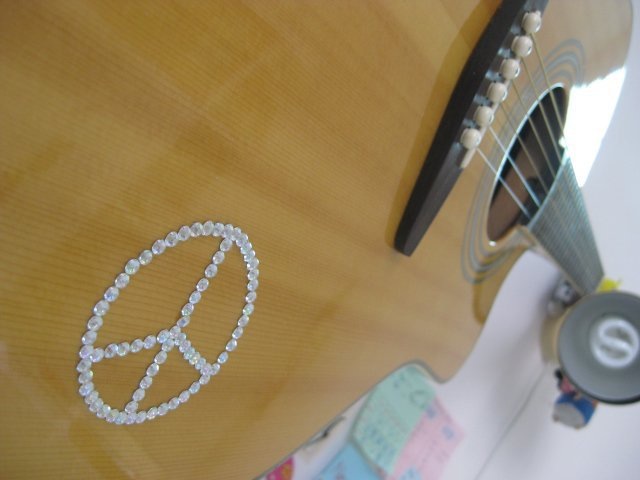 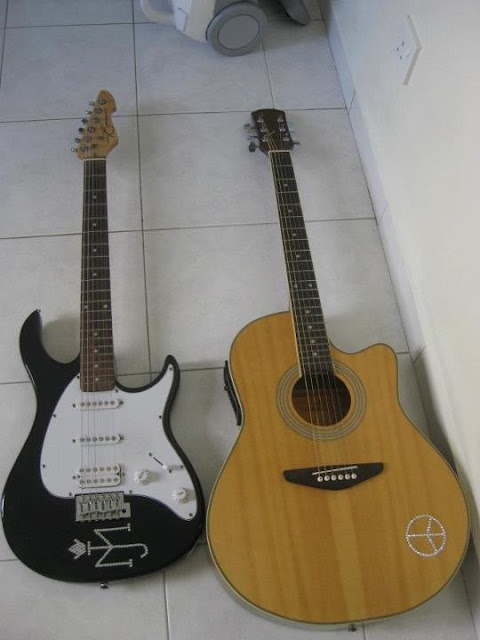 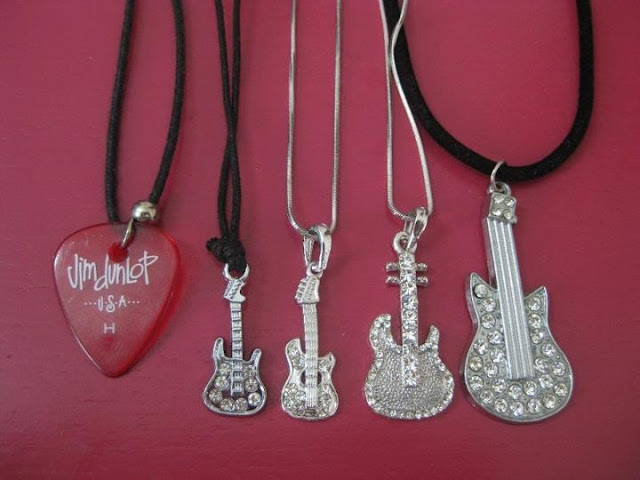 My obsession for guitars can't be stopped anymore!

See.........having Orianthi as my guitar goddess, I am sure I won't lose passion anyhow. How can you lose interests in guitars when you have such an inspiring guitar goddess to look up to?!?! I got Orianthi's Believe album from a friend for my 16th birthday present. And I got even more obsessed with her. Then my friend gave me her poster as well!!!!! My ORI FEVER got more and more serious, but who cares? Just like Orianthi said in her interview that she wished that she would be able to inspire more girls to play guitars, now I am one of those girls and I am proud of it...darn proud! I LEARN GUITAR BECAUSE I AM INSPIRED BY ORIANTHI! 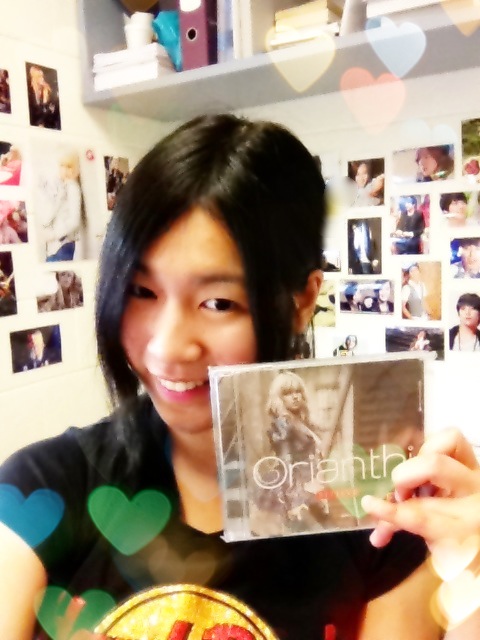 I AM SO GRATEFUL I FOUND THIS GIRL NAMED ORIANTHI PANAGARIS.

Here's the start of my obsession with ORIANTHI PENNY PANAGARIS! You can called it insanity; I called it MY ENDLESS LOVE AND SUPPORT FOR ORIANTHI PANAGARIS!

[To be continued PART 2: SEEING ORIANTHI LIVE IN CONCERT!]