Old Memories from My Old Room

After living 6 years in Melbourne on my own, I am now back in Penang. 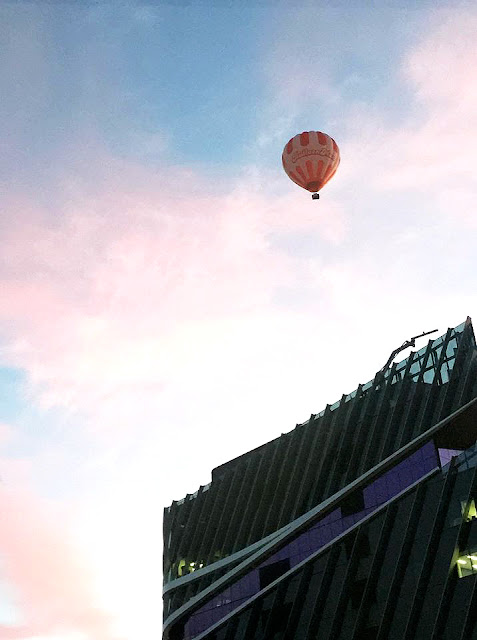 I miss my room and my apartment in Melbourne so much though. Not really getting used to the heat here T_T
Before I left Melbourne, I wrote a blogpost (click here to read) and it hit over 3000 views in less than 5 days. That's so surreal. I received several messages from friends and strangers on Facebook who private messaged me to wish me good luck. Some of them even told me that my blogpost got them to start thinking about their lives and to evaluate whether they are going after their dreams and happiness and not living life "just because". Seriously, I am beyond thankful for all of these messages <3 <3 It was never my intention to make it sound like an enlightening lecture but I wrote it because I wanted a place for me to pen the thoughts in my messy brain. Thus, seriously THANK YOU to those who took time off to read.

Anyway, back to my room in Penang. Even though I was going in and out of this room within the past 6 years, I never bothered to really go through my cabinets and closets to see what's in there. This time, regardless of how long my stay will be (somehow my intuition tells me that I'll be back in Melbourne pretty soon), I finally decided to go through everything in my room. As expected, I found lots of things that contain lots of memories which I thought it'll be interesting to share. 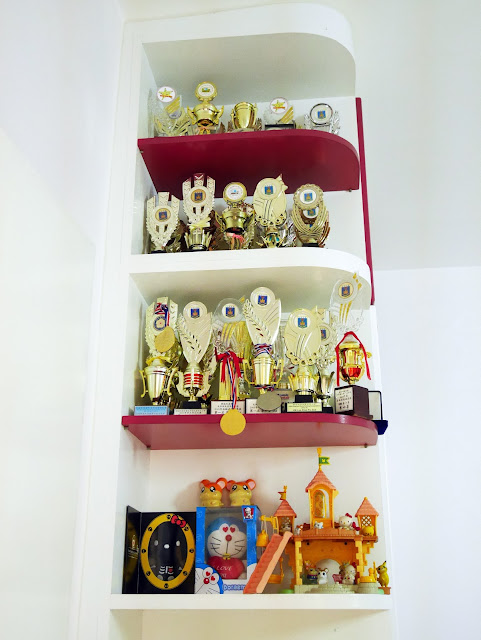 Can't you tell I used to be a good student back then when I was younger! HAHA!

All these trophies serve as a good reminder to myself that nothing cannot be achieved with hard work. My mom used to carry out trades with me - if I won this competition, then she'd get me a new pencilbox or whatever I was desiring at that time. At hindsight, that's how I learnt to be stubborn with my goals.

Even though I sucked at Science at first, I ended up graduating as the top achiever in Science subject for continuously 3 years. WTF, I still can't believe I actually did that! Why didn't I become a doctor?
As for those who have seen my typing skills in real life, yeap, I went for typing competitions when I was in primary school too and maybe lots of MSN and Neopets :P

Then I had the track events, typically 100m and 4x100m which were my favourites. I always took the last baton for 4x100m because my teammates had this fear that I wouldn't be able to pass the baton properly to someone, so it's better for me to just receive it and finish it off!

There were 2 competitions that I couldn't even be bothered to put any effort - Arts and Chinese Calligraphy. I knew I was bad anyway and mom didn't really pressure me into them so I was the happiest when I could just pester my friends when they were focusing on the competitions >< Other than that, I was participating in nearly everything: essay writings, computer quizzes, public speakings, story-telling, Mathematics and etc.

I used to complain about all the hardship that I had to endured in order to earn the things that I wanted. Now as an adult, I totally understood and am ultimately thankful for my mom for giving me such strict training to shape me into who I am today. That's how I learnt "if you want it hard enough, you will find a way".

Speaking of which, how come I never had issues with procrastination back then? 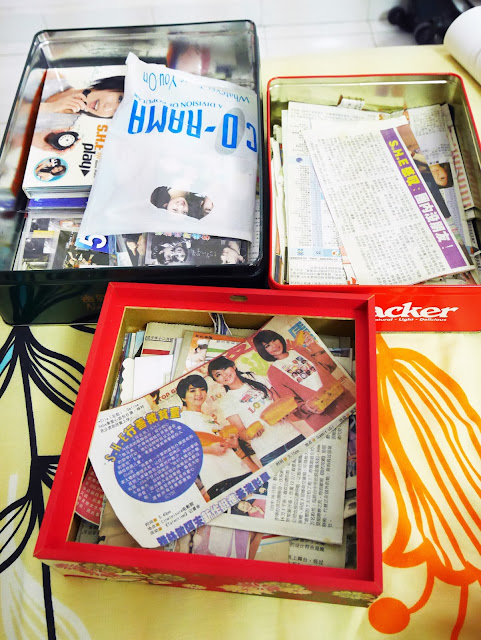 I used to guard these 3 boxes with my life. No joke. I would throw a tantrum at home if I found out that my grandpa had sent the newspapers for recycling before I cut out the photos of my idols. Most of my collection centered around the Taiwanese girl group called S.H.E. I started off being a big fan since I was 8 years old, still am right now and I believe every Asian kid idolizes them anyway :p 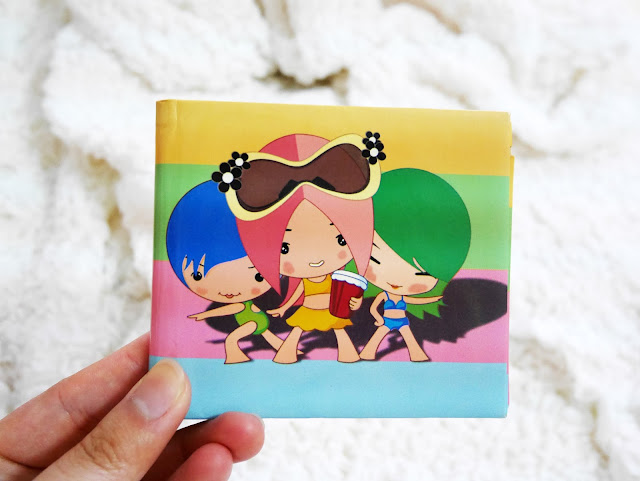 
I knew that our school forbid us to bring anything related to celebrities, so I deliberately brought this to school to show off. What a filmsy little wallet that couldn't fit anything at all and it broke after a short while. I thought it was cool back then because everyone knew it's S.H.E but technically it wasn't really against the school rules :P 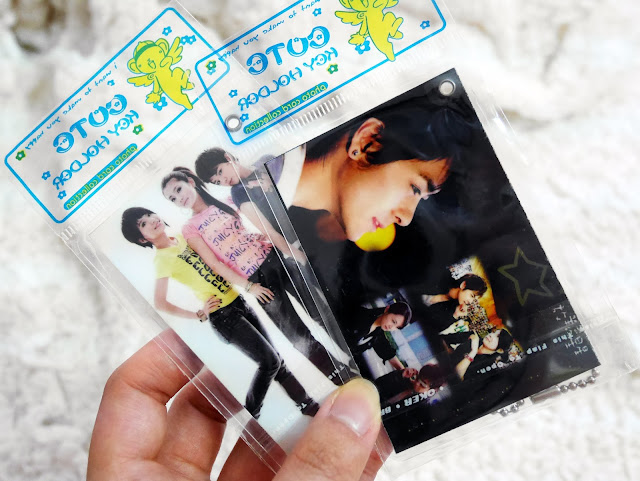 How I would go obsess over laminated photos back then! Spoiler alert, I had more than 2 of these! Probably 1 dozen? *oops* 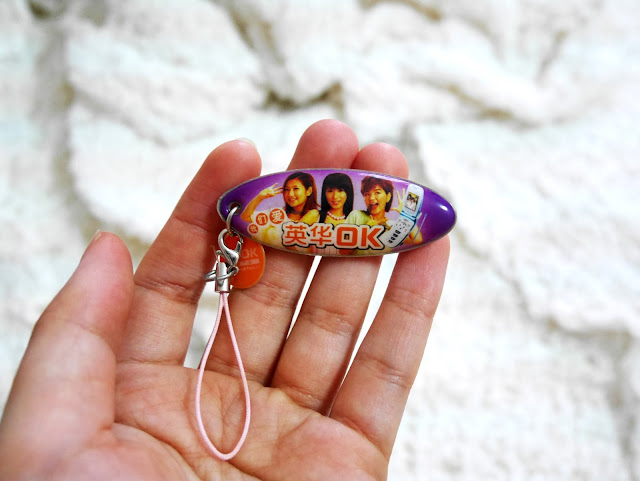 I had this keychain on most of my pencil boxes throughout primary school. Until one day, my tuition teacher accidentally smeared some red ink behind it and it broke my heart so I kept it in my collection box. 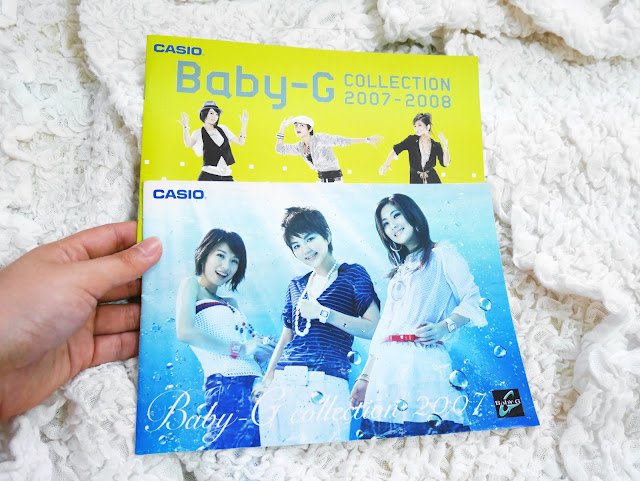 Baby-G was my dream watch back then up till 1 or 2 years ago when I was finally convinced that it doesn't fit my chicken wrist! 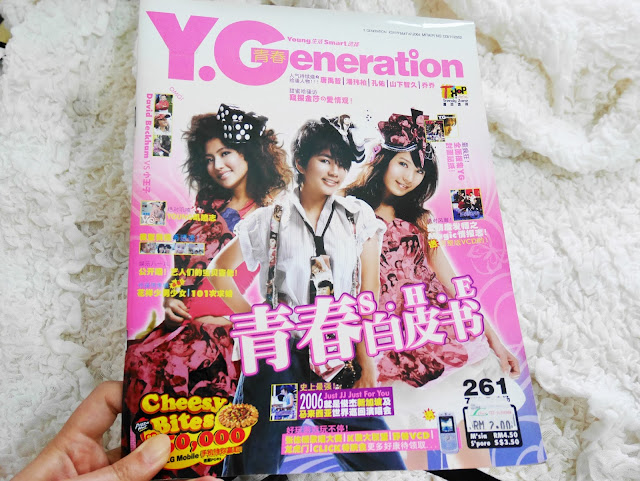 First entertainment magazine that I bought with my pocket money. 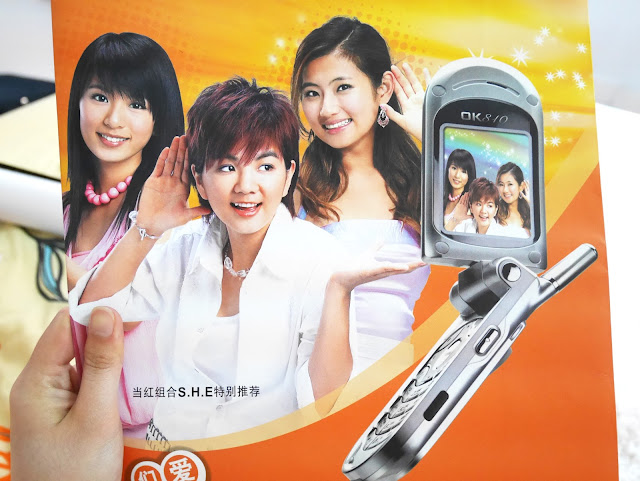 Before the existence of touchscreen smart phones, flip phones were the coolest thing ever! 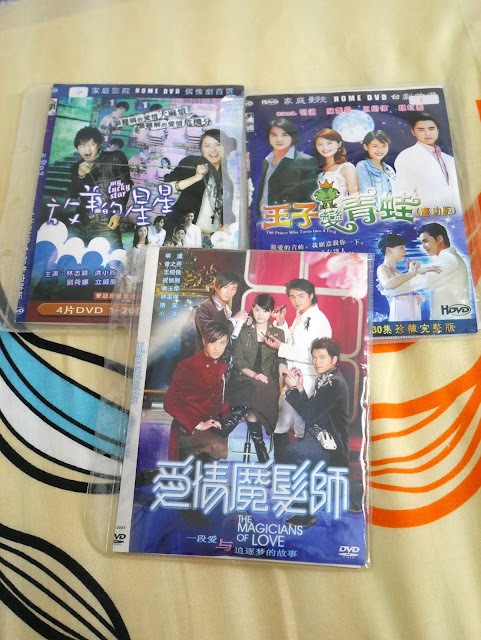 Before Korean dramas came about, I was obsessed with Taiwanese dramas. 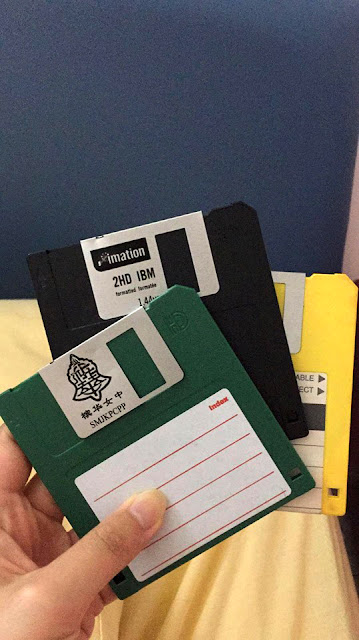 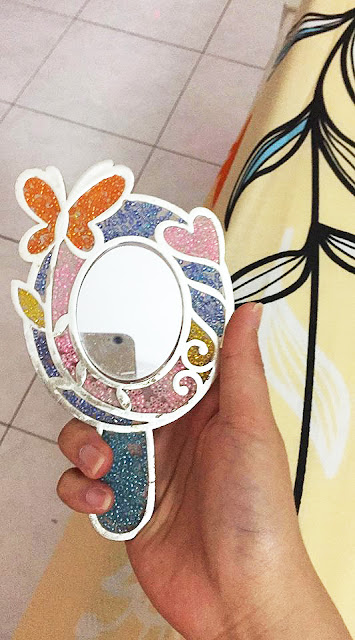 I used to love D.I.Y toys so much and this is the mirror that I decorated with coloured beads. 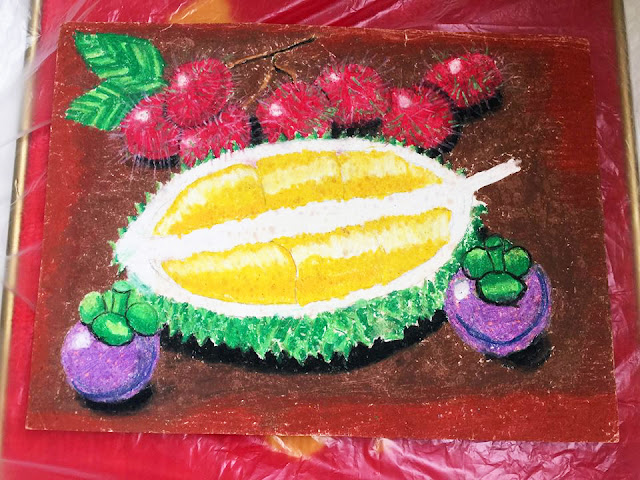 Mindblown when I looked at this drawing that I did in Art class when I was like 7 or 8 I think? When was the last time I was doing alright at colouring? 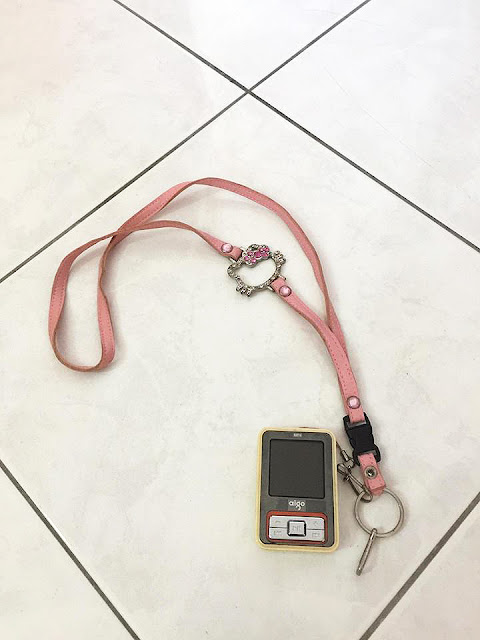 This is one of the most cherish items in my possessions - a coloured screen MP4. I got it from a close family friend as a congratulatory present because I graduated primary school as the 1st in the entire Grade 6. I held onto this thing for a good few years before it stopped functioning and I switched to an iPod. 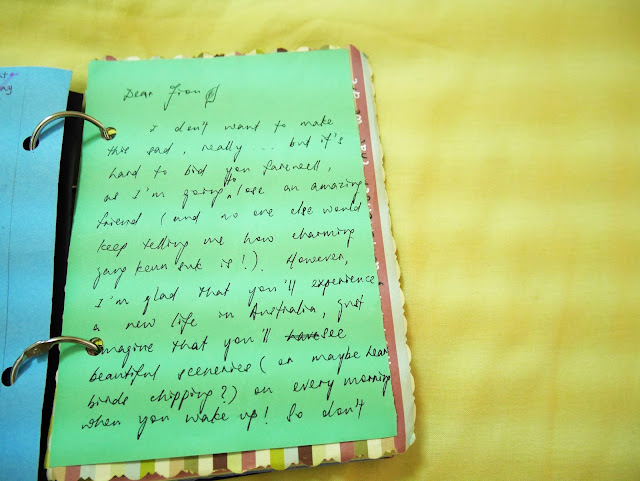 All the farewell messages my friends wrote for me 6 years ago before I left Penang for Melbourne. 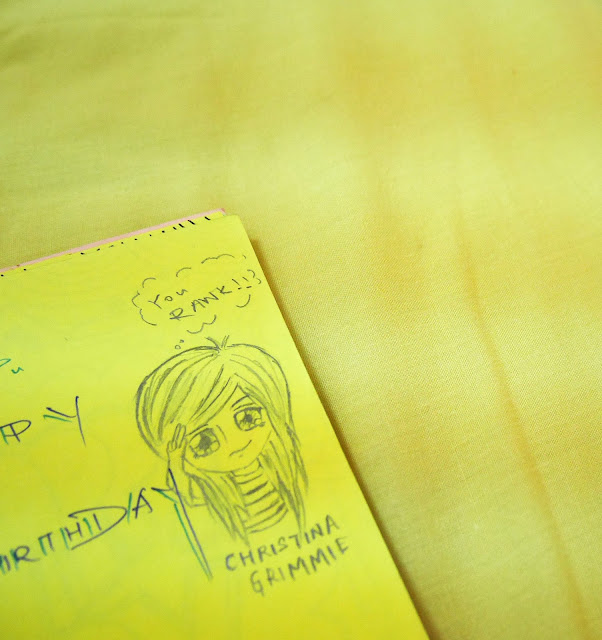 This makes me so sad...I used to be a crazy fan of Christina Grimmie and braiwashed my friends with her Youtube videos all the time. She's supposed to be the same age as me but sadly she passed away at the age of 22. 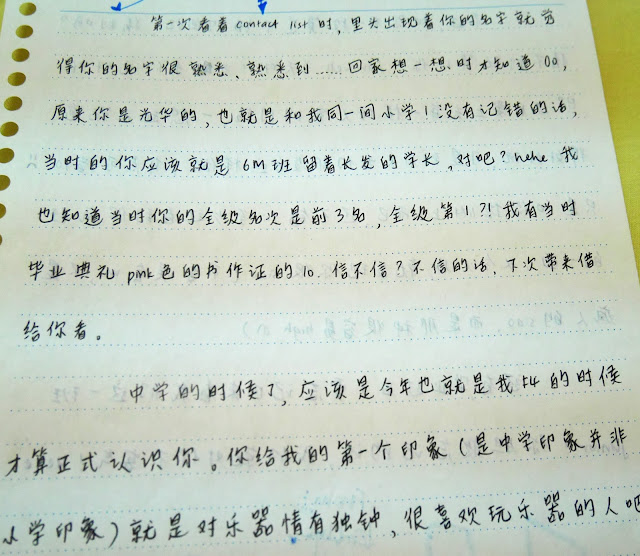 Reading through the messages that a junior wrote for me, wonder how is she doing right now... 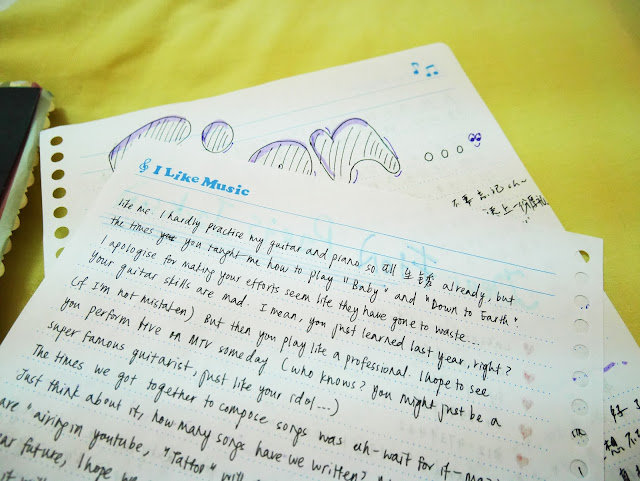 I'm glad that I still keep in touch with some friends though and we still laugh about the stupidest things that we used to do back then like writing our own songs and skipping club events just to play piano and sing in the school hall. 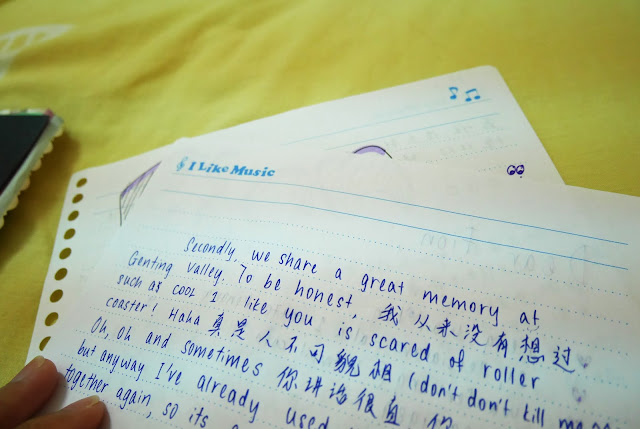 This girl used to complain that I was too blunt and too lecture-y. 6 years later, she's the one who lectures the shit out of me. Yes, I still am afraid of roller coasters - that remains the same. 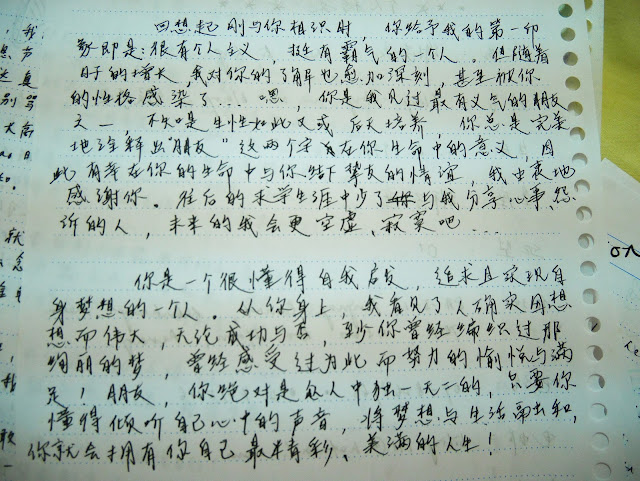 Used to sit next to this girl for continuously 3 years and we still are close friends up to this day. Our conversational topics evolved as we aged. 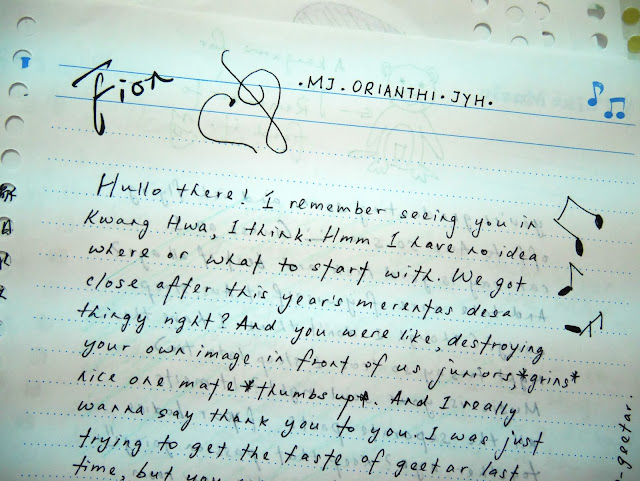 This is from a junior who I haven't seen in years but one who I still chat with from time to time on Facebook. 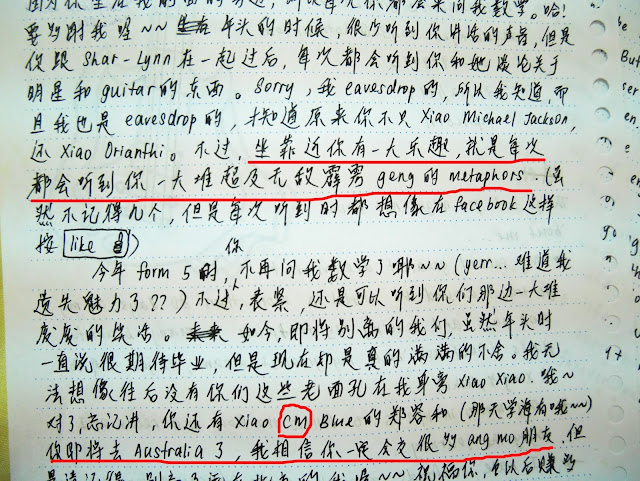 This one is the funniest one because we were never close friends back in high school but who would've known that we'd end up staying together for 3 or 4 years in Melbourne under the same roof.

How amusing it is for her to put up with my crazy self-invented metaphors up till this day. 6 years and she's still being mindblown by my crap most of the time!

And girl, let me tell you something: (1) it's CN Blue, not effing CM Blue! (2) You can't party for god's sake and I'm not bringing you to the club anymore (3) Sorry to disappoint but I didn't end up with many Australian friends - what a gap between expectations vs reality of studying overseas. 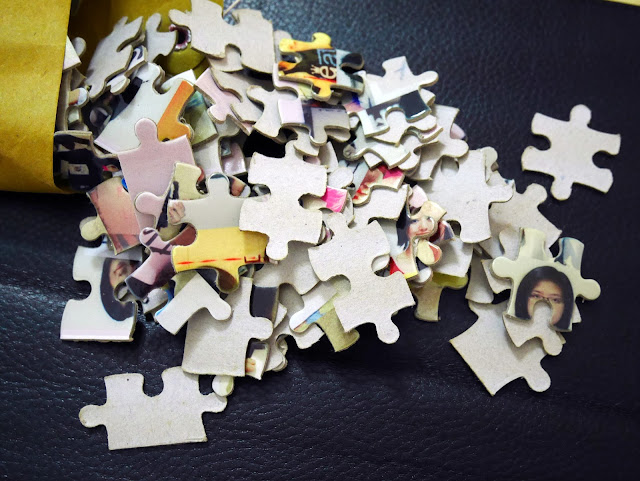 Custom made puzzle with photos of my friends as my farewell gift. Sad to say that I've never been good with puzzles so they remain like this ever since then :P ops! But, I still cherish it a lot! 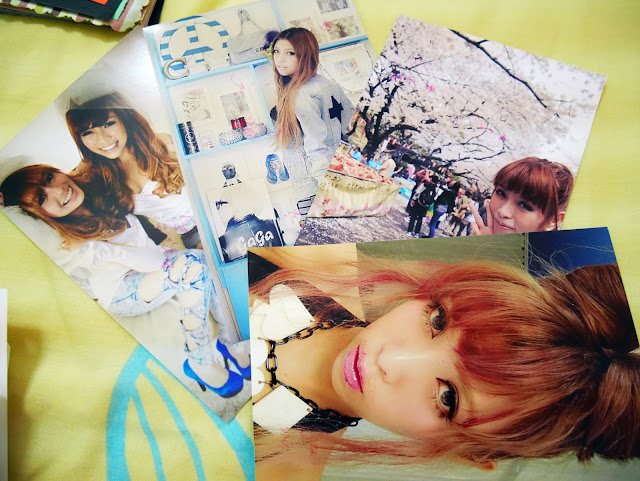 Autographed photos by my favourite bloggers - Cheesie and Audrey. This was back in 2012 when I went to my first bloggers' event in KL (read here). I met so many awesome bloggers and Instagrammers on that day. That's the first time I met Chanwon after reading her blog for several months and today she's a super famous and successful blogger and also a big sister to me ♥

As I went through all these keepsakes, I realised that many things have changed yet many still remain the same. Technically speaking, 6 years is not really a long time but it's neither a short time either. I went from the stupidly innocent 18-year-old to a 24-year-old who have had nearly 2 years of corporate working experience. Throughout these years, I achieved some things and also disappointed myself with some things. I lost some friends but have also gotten much closer with some friends (old and new) than I would've ever thought. I no longer wear graphic tees all day err day, in fact most of the clothes in my closet right now are plain-coloured ones and to my astonishment, I don't even own a single pair of denim anymore! I didn't end up doing dance nor music as my electives during university but real estate, business forensics and fraud, Japanese. One thing that I am proud of is that I managed to fulfill my wish of working in a cafe as my first ever part-time job (I used to make pretty decent cappuccinos FYI).

How amusing is life! It really can take you to places that you wouldn't have imagined before.
Labels: The Scribbles