I was supposed to write this before 2015 ended, but here I am writing it on the second day of January 2016. One of the reasons was because I wanted the feelings to sink in first so I could write about 2015 with a peaceful and indifferent mind rather than having to feel that "this roller coaster of 2015 is still not at its official end"...if you get what I meant...

2015...I don't even know how to begin. I would say that apart from 2014 which I thought I learnt a lot and I thought it's THE most happening year for me, I wouldn't say the same anymore after going through 2015. Sorry 2014, your place has been replaced.

♠Went to Taiwan again after so many years. Visited my grandma and my aunty in Taoyuan. Paid a visit at my dad and uncle's grave for the 2nd time of my life. Also went to Kaohsiung for the very first time. Thanks to my friend Ian who I hadn't seen for years who brought us around.

♠I turned 21! Got a big surprise party that my mom and my best friends threw for me. Both of my primary and high school best friends came. Unlike most of my friends who had their glamourous birthday parties in Melbourne where they were showered with Tiffany & Co, Pandora, Swarovski, I received a present which was very simple to most of the people but VERY meaningful and precious to me - a handmade photobook that all my friends came together for a few nights behind my back to complete. It's so important to the extent that I would put it on the list of "things to grab in case of fire" together with the pillow that my grandma made for me when I was 3 years old! It's this serious! It was a blessed birthday, simple yet heart warming and that's enough for me. Mom gave me a platinum ring with diamonds on it because I explicitly told her that I didn't want a key pendant. While I got a platinum pendant from my mom's boss.

♠I met up with Kharn Yee and Rachael for the very first time after meeting them through blogging. Didn't know how and when, but the friendship just bloomed over the Internet.

♠The very last time I was there to help out with the Korean Society's orientation event. I could still remember the scene where I approached the Korean Society's booth in 2013, feeling very anxious and afraid and intimidated but 2 years down the road, I heard the newcomers who told me that they wanted to me like me - not a Korean but being able to understand the Korean language and being able to have Korean friends and learn about Korea so much.

♠During the mid-year, I "retired" as their first Treasurer who's not Korean and that marked the official end of my life in Korean Student Society of Melbourne University (MUKSS). I wouldn't have imagined I could have a day like this. Well, it didn't come easy. What I seldom disclosed was the start of my journey being in Korean Student Society was really tough - I got yelled at, got kicked out of the dance performance because they wanted their Korean friends instead of a non-Korean there who needed translation all the time, a senior who tried to take advantage of me when he was drunk (of course I escaped), a senior who I had a crush on who turned out to be stealing the club's money by transferring them into his personal account etc...It's all about either you starve or you learn AND I'm proud to say that I survived and have made a lot of great friends who taught me a lot throughout these years AND I can understand basic Korean nowadays.

♠I saw my favourite girl group S.H.E live on stage after 9 years. This time around, it was their own concert. Dream came true!

♠I traded in my white iPhone 4S to a golden iPhone 6.

♠Went to Krabi and Langkawi over winter break.

♠Started to pick up the habit of keeping a diary. I love my Midori diary so much, a place where I can be myself and speak what is truly in my mind, it's a getaway for me.

♠I fell in love for the very first time in my life. Whatever that happened throughout the relationship was part of our memories - be it the good or bad, the laughter or the tears. I still am grateful for his existence in my life and that's all that matters.

♠I graduated! This should be the biggest thing of my 2015! After years and years of being a student, now I am officially done with school. Exactly 4 years and 10 months of being in Australia, I finally got that very expensive paper that I had been dreaming of for nearly my entire life. Thanks to my mom for giving me the greatest financial support without her I wouldn't have been where I am today. I know I always appear to be taking things for granted but I'm just not a very verbal person when it comes to family members...I AM THANKFUL FROM THE BOTTOM OF MY HEART, ALWAYS. Also, to my real friends who accompanied me throughout this up-and-down journey, my housemate Chernie and lastly DCat who gave me the greatest support when I was feeling stressed out and pushed me to study harder in my final year of University (results wouldn't have improved if it wasn't for him, sadly he couldn't help with my Fianance papers HAHA). The journey had been full of sweat, tears as well as laughter and smiles...It's just a great milestone in my life that I swear to god that I will never ever forget. 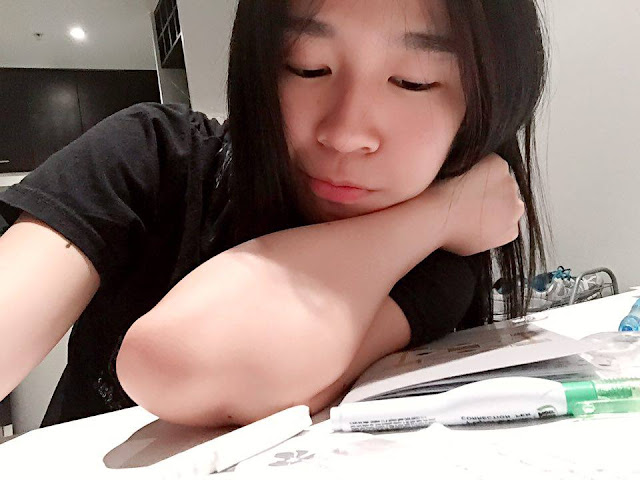 I'm just ending this post with the last selfie of mine for 2015! Here's me trying to catch up with my December diary entries that I till this day haven't managed to catch up with! HAHA!

All the ups and downs that belong to 2015 and let them end there. The most important thing is WE ALL SURVIVED and that's it!

Life is not Accounting, so please don't bring your balance forward - what happened in 2015 stays there. 2016 is a brand new start. Start it with a smile! Just like a card game, close all the cards and shuffle the deck once again and anticipate what cards you will be getting in 2016.

May you have a wonderful 2016 ahead! :D All the best!
Labels: Highlights / Favourites The Scribbles