Don't Have To Explain

You don't have to explain yourself.

Alright, just to clear things up, I am not saying this in terms of a court case and you don't choose to explain yourself and then go enjoy endless curry rice supply in the jail. This is definitely not the context that I am talking about.

Today, I am talking about relationships, in general - be it family members, friends or partners.

I used to care a lot about people talking behind my backs. However, as I grow up, I realised that I don't have that time to care about what people want to think. Or is it that I had been through so much similar cases that I have developed a certain degree of immunity in relation to this? I don't have a solid answer to that.

Nevertheless, believe me or not, there are people out there, no matter how good you are to them, they just genuinely have a problem with you.

I had several experiences like this, no matter how well you have treated someone, they would still have things to complain about you.

Back in the early days of entering Melbourne University, I made a couple of friends and I thought we were best friends. Until one day, they told me in my face "Fion, if you can't shop LV, Prada with us, then you can't shop with us from now onwards". 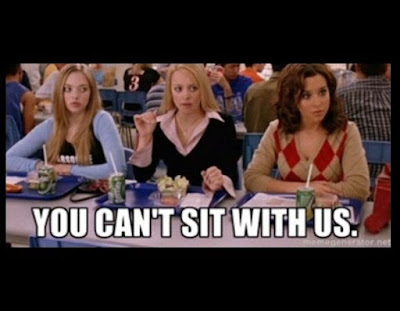 I honestly thought that this kind of situation belongs to high school, like those scenes from "Mean Girls".

I was really taken aback because back then when I was in an all girls' school, nothing like this ever happened to me BUT it freaking occurred to me when I was in University.


I felt hurt and I felt like an abandoned kitten and I was really sad. Since I had no more new friends, I decided to join the Korean Society, the rest was history - the days where I starved and learnt Korean etc...To my surprise, those girls did not stop gossiping and talking shit about me. Even though I had cut ties with them ever since they told me that I wasn't allow to shop with them. They just NATURALLY have something to say about WHATEVER I do...

The earlier days of my survival in Korean Society, those girls gossiped about how much of a wannabe I was to wanna be Korean (which to their disappointment, I NEVER DENY, YES, I AM A KOREAN ADDICT, I AM A KOREAN WANNABE duh...). When I started to perform in the K-Pop dance group with lots of tears and sweat behind which they never know to the day when I became part of the executive committee of the Korean Society, they had comments about every single thing I did.

There are a lot of people out there who don't have better things to do but to spread rumours and make nonsensical comments about someone else's life.

The thing is that...you know how crazy rumours can spread. When a lot of people start talking about something that is not factual, then SOMEHOW, god knows how, that thing will become a fact - in fact, it becomes so god damn factual to the extent that it should be listed in the encyclopedia.

My point is that you don't have to ever explain yourself to clear all these rumours. They were called rumours for a reason and also not being in the encyclopedia for an epic reason.

People who TRUST you will trust you, BY DEFAULT.

People who LOVE you will love you, BY DEFAULT.

People who will NOT BUY THAT SHIT, will just not buy that shit, BY DEFAULT.

At the end of the day, these nasty situations will just show you who your real friend really is. The person who trust and love you, will know you well enough to not buy that shit.

For the so called close friends or loved ones of yours who will come around and judge you based on some bullshit comments, rumours or anything - those are not REAL friends or loved ones. Those are just fake labels. Just like how you can get a plastic bag and write "Gucci" on it. Yes, recognizing this painful truth hurts BUT this is the real shit.

The society is like that. It moulds you and it transforms you into someone who you are not. What the society does, regardless it is right or wrong, if a lot of people start to do something or start to believe in something then that would appear to be right.

In fact, I believe that life is not about right or wrong. If not, why are we living a life? We should all be programmed robots to save up all these shit and just talk about productivity and efficiency.

A lot of things in life just don't need explanations. Why do you need to explain to other people about how you are living your own life?

YOU NEVER NEED TO GIVE EXPLANATIONS, because you don't OWE ANYBODY EXPLANATIONS IN THE FIRST PLACE.

At the end of the day, it is just to accept the fact that people can think whatever shit they want and label you however they want. Believe me, a waterlily is a waterlily, it can bloom out of the dirty mud but still look perfect. A diamond is a diamond, no matter how hard you smash it, it will still look perfect because it is the hardest rock. There are no explanations needed for that.

You are just who you are.

People who personally know you and love you for being you will not need those explanations from you.

Those who need those explanations will not believe in your explanations because they would've already formed an impression of you based on those judgmental comments in their heads already before asking you.

So why bother? Might as well get yourself some popcorn and snuggle in with Netflix ;)
Labels: The Scribbles